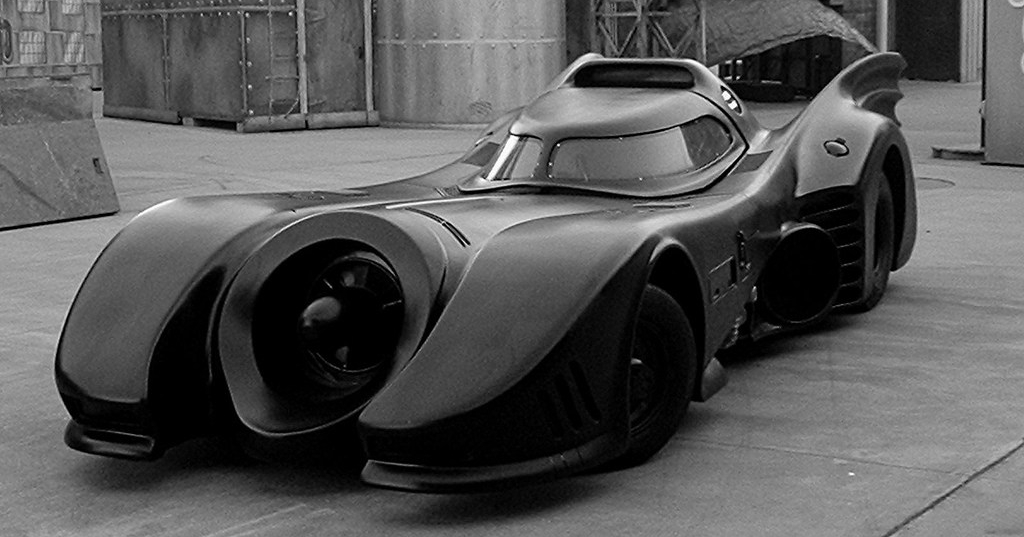 In 1989, Tim Burton forever changed the viewpoint of Batman on the big screen. With the help of designer Anton Furst, the two collaborated to create a grungy backdrop of an art deco-like, dystopian city known as Gothem. While dropping into the filth covered alleyways, the mysterious black bat dissolved into the nighttime shadows with help from an arsenal of modern gadgets, including grappling hooks and smoke screens and the most iconic accessory of all — the 1989 Batmobile.

A creation by Aton Furst. Both Burton and Furst sketched through hundreds of designs before reaching the new look. “I didn’t want a futuristic vehicle on a pastiche 1950s car. I went for the most brutal expression of a car, an image which also suggests sex and violence.” Said Anton. (1)

“The Batmobile worried us a lot. “ Burton admitted. Early on, it seemed that everything Anton and I came up with just looked like we were putting fins on cars. Cars can so easily become a joke – people don’t realize how difficult it is to make a new kind of car. After a long period of time in which Anton reworked and refined and adjusted the design, we finally hit on something that looked good. Even after the drawing was done, though, we still were not sure how it would go over in the film. It wasn’t until we saw it in rushes that we knew it was right.” (1)

After agreeing upon a design, Furst only had five months to build two cars; one for props and the other for stunts.   This meant the new Batmobile not only had to be visually exciting, but functional as a real car. Furst admitted. “In a way, the Batmobile was a more hairy project than building those huge sets. It certainly worried me the most, because it was such an important element of the film, it would have been terrible to come up with a Batmobile that was weak.”

Due to the tight schedule of projects, Furst relived the build to John Evans, Special Effects supervisor. To speed things up, the car was even by-passed through computer rendering and put straight into clay formation. The initial model was only two feet long and six inches tall. But when in full scale, the molded body needed to be twenty-three feet long and nine feet wide.

While the body mold was being painstakingly carved, the frames were in the process of being fabricated. Evans noted. “Because we were so short on time, I felt that I’d rather than experiment with and get a chassis that was proven . . . So I went out and found two 1974, V-8 Chevrolet Impala chassis at a junkyard . . . we lengthened them by two feet, packed the wheels out four inches and dropped the engine about twelve inches. We also put a new suspension in and fitted the chassis with twenty-four-inch-width Mickey Thompson drag racing tires.

Once the body cast was complete, it was shipped off to a company that specialized in building Le Mans racecars. The final molds were formed out of Kevlar, which is an extremely light and strong polycarbonate material. Last touch was the paint job. “There were about six different layers of colors to give the car the finish of a beetle – a lot of colors coming through the blackness so that it had a three-dimensional quality to it rather than being just a flat black. We did not go to a full gloss on it – we left it with a slight matte finish to make it look more like a war machine.” Said Furst.

Finally the Batmobile was fitted to the chassis and the arsenal of components added including and array of fighter aircraft gauges and military 9mm Browning machine guns. “AII of the controls for the guns were actually inside the car. Explained Evans. “We had speed regulators on them so that they could go at whatever speed the director wanted at the time. The flaps of the car were on compressed air so that they could into the air.”

But of course the most Iconic feature of the Batmobile is the turbine, and on this version, the entire car design was wrapped around a jet turbine. Although not real, making the afterburner work was a high-temperature situation. “We had to have a lot of flame – which of course, generated a tremendous amount of heat. We insulated the back of the car and we also put Co2 extinguishers in a ring around it, just in case of an accident with the fire.” Said Evans.

The 1989 was an extension of the character Tim Burton created.  Dark.  Armored. Completely sinister.  Yet seductive.  To this day, if you line up every Batmobile ever produced, the 1989 Batmobile is it is hands down, the most exciting and alluring of vehicle them all.

0 comments on “When Sex Meets Violence. The 1989 Batmobile”